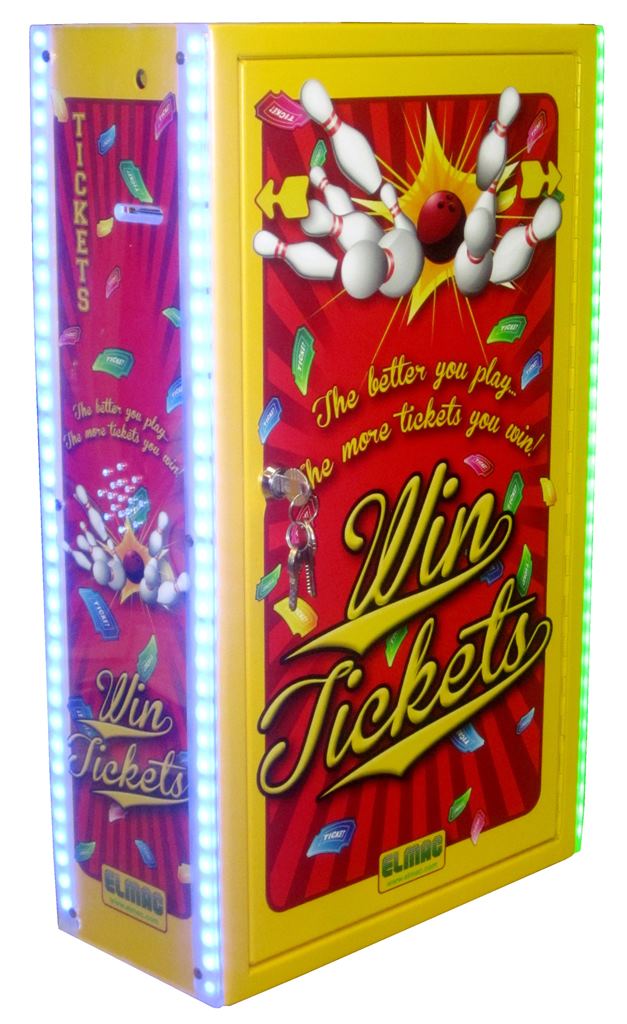 The main advantages of this device are:
a) The acquisition of new customers to the Prizes Operation. In fact, the bowlers usually make 2-3 games, drink a beer and go home, ignoring the other bowling’s attractions. Instead, in this way, having in their hands physical tickets, they become curious by this new and are “forced” to discover the Ticket Redemption department with its relative loyalty to the local through magnetic cards that allow the collection points
b) The facility of installation on all types of bowling, regardless of the management software and the mechanical operation.
c) The final distribution of tickets among the players on a single lane is another reason to socialize with each other, for example, the boyfriend who gives the tickets to his girlfriend, etc.
d) Easy exclusion of dispensing tickets, in the case of tournaments or use of lanes by professional teams, schools, etc.
e) The control of the tickets percentage generated by WinBowling and “spent” in the Prizes Operation. In fact, using the Galileo PRO Ticket Eater and ELMAC Management Kit it’s possible to recognize and store the tickets dispensed by WinBowling than those dispended from Ticket Redemption, this happens equipping WinBowling of ticket with a bar code different from the one located on the Redemption’s tickets.

Given the success of the Ticket Redemption installed in Arcades located into the Bowling Centers, it was thought to involve the players of this sport in Prizes Operation made through the redemption. Elmac has therefore designed and implemented, since 2005, an UNIVERSAL machine, independent of the score and type of machine used, which allows the dispensing of a specific ticket number for each frame played and for each strike, called WinBowling. So, at the end of the game, the player will find himself with a certain number of tickets won and will certainly be tempted to play even on the Ticket Redemption machines to get the most value prizes.
The ticket won will be counted from the Galileo Ticket Eater that releases a receipt or charge them on the appropriate loyalty card that the player has received by the Arcade’s operator.

The WinBowling consists of a special metal container (W 36 D 17 H 61 W 13Kg) and is used for each pair of lanes. It contains two ticket dispensers, two mechanical counters, a key supply, a microprocessor board, two red and one green LED. It is usually fixed on the floor or on the command console, and it’s necessary to pass 2 cables to 6 wires, from the scoreboards to the point of attachment of WinBowling, in order to realize the full installation.
– The counters indicate the number of tickets distributed per lane.
– The electric key is used to enable (green LED) or disable WinBowling, depending on the commercial strategies chosen by the operator (such as excluding it during tournaments or training teams, etc.).
– The winnings can be programmed as desired: for example, 2 tickets for each frame and 10 tickets for each strike.
– The red LED indicate when the container is out of ticket, the capacity is 4000 tickets for each lane.